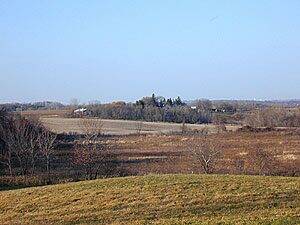 Major roadways bordering or in Eureka Township include Interstate 35 to the west; Dakota C.R. 70 to the north; Dakota C.R. 86 to the south; Cedar Avenue, which bisects the township; and Dodd Boulevard, which runs north-south through the township and was one of the first surveyed roads in the state.

The first claim in Eureka Township was made by C. M. Kingsley in the early 1850s. He was a friend of Captain Dodd, and constructed the claim stake for Dodd, who admired the land area north and east of Rice Lake while working on the extension of old Dodd Road. Dodd forgot about the claim but Kingsley didn’t, and he had a friend, Benjamin Cashey, settle on the Dodd claim in the spring of 1854. Kingsley settled in the northeast quarter of section 17 in July of the same year. 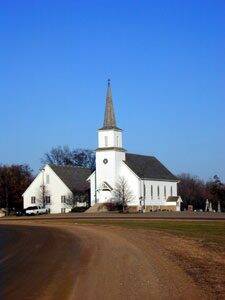 Also in July 1854, Peter Sampson, Ole Torrison, and Ole Oleson led a group of Norwegian families to the shores of Chub Lake in south central Eureka Township. They quickly cleared the land and set up farming operations. Later that year and during 1855, many more settlers arrived to make claims in the township. A large group of immigrants from the state of Indiana settled in the north central part of the township at this time. It is said that this group, which became known as the Hoosier Settlement, is responsible for the name of the township. They were on the move in search of a better life, and when they arrived at the place where they settled, they cried “Eureka!” meaning “I have found it!”

Although some of Eureka’s early records have been lost, it is believed that the first meeting for the organization of the township government was held in the barn of Isaac VanDoren sometime in the mid-1850s. The township was officially created by the Dakota County Board of Commissioners in May of 1858. Garrick Mallery was the first chair of the Eureka Township Board, and Cornelius Wagner and Joseph Bean served as the other two supervisors. James Pool was the first township clerk and Isaac VanDoren the first treasurer.

Three sites in Eureka Township are listed in the Minnesota Historical Society Inventory and have been identified as resources with historical significance: Highview Christiania Church (pictured above) located at 267th Street and Highview and dedicated on November 11, 1878 (immigration and settlement significance), the Stuckmeyer Farm located in the NW quarter of Section 36 on Denmark Avenue (architectural significance, immigration and settlement significance), and the old Eureka Town Hall, formerly located on old Cedar Avenue and now located on private property a mile north on Cedar Avenue (political affairs significance).

The Board of Supervisors is the governing body of the Township, and is elected by direct ballot of eligible voters. There are currently five Township Supervisors who serve three-year terms. The Township staff also includes a clerk, a treasurer (appointed by the Board of Supervisors), and a building inspector. Eureka has a citizen Planning Commission whose members are appointed by the Town Board. The commission makes recommendations to the town board regarding planning and land use issues.

In accordance with Minnesota Laws 1977 Chapter 145, Eureka was granted “urban town” powers in January 1978. This act grants the Township certain powers that are usually not available to Townships, such as the ability to enact a zoning ordinance without referendum.

In the last few years, the Board of Supervisors has created several citizen task forces to research issues of concern to the Township. These task forces function in an informal advisory capacity only and are not empowered to enact policy.

Beginning with the first settlers in 1854, Eureka’s population grew rapidly as a thriving farm community became established. By 1870, the population had reached 924; after that time, it slowly and steadily declined until it reached a low of 600 in 1950. This decline was a result of the rural to urban immigration that characterized many farm areas in the early part of this century.

After 1950, improved highway access, inexpensive energy, and the suburban growth boom put Eureka Township on the fringe of suburban growth in the Twin Cities metropolitan area. As the chart below illustrates, the population began to grow again in the decades after 1950 and has begun to grow very rapidly in recent years.

Approximately 8% of the population of Eureka is employed in farming or farming-related industries, down from 19% in 1970. Other major occupations include construction (8%); retail trade (15%); educational, health, and professional services (21%); and manufacturing (23%). 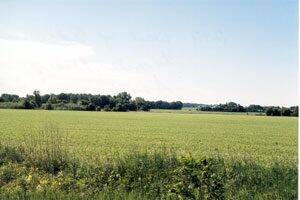 Eureka Township has the largest percentage of high-quality farmland in all of Dakota County. Two-thirds of the land area in Eureka contains prime agricultural soils (Class I or Class II, based on the Agricultural Capability Groups and Crop Equivalency Ratings).

Although the subdivision of land for residential building is the fastest growing use of land in Eureka Township, agricultural uses are still by far the most prevalent and extensive. The following chart provides a summary of existing land use, by acreage, in the township. 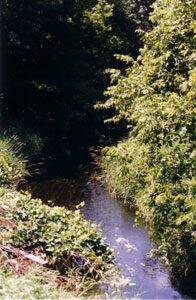 Two major watersheds drain Eureka. The Vermillion River Watershed covers more than half of the township. Rice Lake—located in the northwestern part of the township—is commonly considered the source of the Vermillion River (pictured at left—photo by Pat Steege), and dozens of tributaries and drainage ways in the township drain into the Vermillion as it winds its way east through Eureka on its journey to the Mississippi River. Southern portions of the township drain to the north branch of Chub Creek, which flows southwesterly into the south end of Chub Lake. Chub Creek and Chub Lake are a significant part of the North Cannon River Watershed. The 192-acre Chub Lake Wildlife Management Area was established in 1999 to protect these important natural resources and preserve them for future generations to enjoy. Several landowners in the township have also participated in wetlands restoration projects in Eureka.

In presettlement days, most of the township was open prairie or oak savannah. Since then, the majority of the land in Eureka Township has been cleared for agricultural purposes. Consequently, there are no extensive native stands of trees except in the immediate vicinity of Chub Lake, where much of the land is still in forest cover. There are also several farm woodlots, especially in the southern and western part of the township. Most of these stands are less than 40 acres in size and are generally composed of deciduous trees such as oak, elm, boxelder, and silver maple. Some support native woodland flowers and shrubs. Several low-lying wet areas and drainageways support brush, swamp vegetation, and native prairie flowers and grasses.